11:21 AM: Awake. What did  do last night? Why do I always forget what I did the night before, oh no never mind I just remembered it was kind of boring and thus not worth remembering. Met up with friends at Capri Social Club for more drinks after watching the Bruce Jenner interview at Sean’s house, media event of the season. God bless Bruce, God bless all Kardashians especially Kim and Kanye. Making coffee. Roommate emerges from his room wearing underwear in want of a piss, does this daily, I am here yet again bearing witness to his biological impulse. I don’t mind, it’s fine.

11:45 AM: My first look of the day is always a travesty: red Abercrombie and Fitch sweatpants, black windbreaker, ridiculous white spring scarf, Nike slides to go outdoors, smoke cigarette and buy milk/toilet paper/fresh fruit, but who cares. Oh I suddenly care because it’s not that early anymore and attractive people with their lives figured out are seizing the day, taking care of things like responsible, fuckable adults, and I’m out here ruining my health in bad clothes, unshaven.

11:48 AM: Receive text from collector: “What’s the preferred way of hanging your painting?” Um, hello, it’s a painting, throw some screws in the wall and hang it.

11:55 AM: Back indoors reading Christian Viveros-Faune’s (thrilling surname) Village Voice review of the Noah Davis show at something called the Underground Museum in the East Village. Feel suddenly motivated to see it today in spite of there being no L train service and in spite of an art venue using the word “underground” to describe itself. If there were pills or a therapy to cure one from rolling one’s eyes, I would consider signing up for the clinical trial. I think I will like this show, anyway.

12 noon: Reading emails I haven’t read yet, received one yesterday at 4pm from Samson, sexiest man in New York, he says his band is playing a show this evening in Bushwick. I am late turning in the album art for his record, our relationship is absolutely fraught by uneven desires, why have I seen him naked dozens of times, how do hot people reliably inspire fantasies of death/ruination and why am I always here for it/rearranging schedules/moving mountains in order to return and endure this scenario one more time. Pretend thoughts of suicide. I don’t know. I never know.

1:25 PM: Suddenly sucked into reading something on The Cut (New York Magazine) about fabulous NYC interiors via link posted on the Facebook page of gay acquaintance. I must say, wealthy people are better at everything, but why am I reading this, I don’t care, although yes I do, I care deeply for Jed Johnson’s Federalist period living room crafted specially for his lover Andy Warhol, this seems like a nice fact that I will cherish forever, glad to have had this visual, perhaps I should shower, shave and get on with it.

2:45 PM: Eye contact with five-year-old in baby carriage, McCarren Park, fills me with sudden unspeakable rage. Have I stolen every joke from Fran Lebowitz or just this one.

3:10 PM: Exit B62 bus, board J train, heading toward Manhattan, woman seated here with red hair curated into the shape of devil horns.

3:34 PM: Stopping in for another look at Jamian Juliano-Villani’s brilliant show at JTT Gallery. It’s empty, a blessing. The opening last weekend was deservedly packed. The paintings are so great I can barely handle it. Thankfully she’s my friend so I don’t have to feel jealous. Blow Jasmin Tsou kisses on my way out.

3:37 PM: Here to see whatever it is they do at Rachel Uffner Gallery. Materiality, multiplicity. Fine. Ricci Albenda in upstairs group show is good.

3:47 PM: Lunch alone at Remedy Diner. Cobb salad, seltzer. This feels absurd but I’m recording this day into narrative so why not pretend that this activity makes a lot of sense. Al Bedell likes it here and I miss her. Frank Sinatra’s New York, New York is playing on speakers at insufferable volume.

3:55 PM: Commit sin and read Considine’s press release while waiting for food. He apparently wrote this himself. Cogent, intelligent, alluring somehow, does this guy have it all or what. Name-drops Flaubert and I don’t even mind. It occurs to me that the only acceptable way to collect Considine is to buy the entire show en masse as soon as it is revealed to the public. I hope Bureau is pursuing this tactic.

4:31 PM: Enter FUG Underground Museum on East 6th Street which is literally underground so I apologize for critical eye roll, it will take me some minutes to realize what is going on or why I came here, however.

4:35 PM: Oh ok, yes I remember what it was, very good works by all included, especially enjoying this Deana Lawson photograph and paintings by Henry Taylor, Noah Davis. Chic collector has entered behind me and I think she likes what she sees. She must feel edgy down here in the East Village where the threat of random buildings collapsing into rubble at any moment is apparently real.

4:59 PM: At the Hole on the Bowery. It’s a group show about jpegs or something. Good job everybody. Jeanette Hayes’s work looks cool, thank God.

5:36 PM: Exit J train in Williamsburg, can’t help but notice that a young man in heels has demolished the gender binary. Decide to walk to Greenpoint from here and listen to One Direction songs.

6:00 PM: One Direction sings: “where do broken hearts go?” obviously they go to the bar.

6:04 PM: $2 Yeunglings at Irene’s, one of several dives in my neighborhood that I love more than life itself. No one is here except a bartender and the funny middle-aged Spanish guy who always sits at the end of the bar, which is fine.

6:55 PM: Log onto Facebook. Lo and behold, people I know are debating specific details concerning Bruce Jenner’s interview in comment threads. Several responses have been deemed problematic, others exemplary, accusations have run amok, is this not a thrilling time to be alive, 1,300 dead in Nepal. Not to indulge in zero-sum games, or to offer perspective, but rather to suggest that parataxis is the era’s most equitable grammar.

8:01 PM: Conclude hour-long staring contest with wall in order to text my only ex-girlfriend a question: “Do you think Samson should replace Zayn Malik in One Direction because I certainly do.” I’m so funny I might literally die.

8:26 PM: Roommate has his laptop in the bathroom so that he might enjoy a sitcom or two while bathing. I’ve noticed him do this before somewhat regularly and I’ve also noticed that living with other people in order to afford rent is a privilege and nothing to be ashamed of.

8:45 PM: Talk for an hour or more with boyfriend who has just returned from the gym. He is quite possibly very adorable and at the same time very mean to everyone but me. Essential qualities in a man. I am frequently touched by the depths of his meanness, new each morning and as fresh as the dawn. The song I relate most to our relationship is Polyester Bride by Liz Phair. Liz asks Henry, her bartending friend: “if I should bother dating unfamous men.” I interpret “unfamous” to mean “nothing special,” and the answer is no. Never bother with nothing special.

10:00 PM: Board B43 bus en route to Samson’s show in Bushwick, which is at some kind of DIY art space which I’m sure is godawful.

Say hello to Samson, hug and kiss on cheek, accept his apology on behalf of the venue.

The opening band features harmonica as well as electric violin. I can’t believe I gentrified Brooklyn for this. I hate experimental performance art. I hate rock and roll; I long for the incoming tide of luxury condos to wipe this crap back out to sea.

Find couch but am overwhelmed with the fear of bedbugs as soon as I sit. Do my best to conquer fear by making small talk with Samson’s bassist whom is seated beside me.

A man in his late thirties and smoking crack has been asked to leave. He takes this news well and is on his way.

I go outside to smoke a cigarette with Samson whose smile inspires great generosity. Samson offers an unintelligible drunk man in his mid-fifties a light. He takes this in kind and is soon on his way.

Have just learned that this show is co-billed as some free spirit’s going away party, the evening’s hostess actually, to say farewell before she departs to India for six months to do whatever it is that white people do there. She is in face paint, a red sequined gown, and harlequin mask. The fear exists that she might never leave.

Inexplicably, there are French people here, speaking French. I pray they find it inexplicably real.

11:33 PM: Samson is finally playing pop songs with his band and I can’t stand how attractive he is. Oh my God I’ve become dumb.

At some point herein I have ordered a fourth drink. Who cares.

Gratifying to see morons enjoy themselves despite themselves. I hope the opening band takes this opportunity to look around and see how people look when they like what they hear.

I turn to Samson’s brother Max, whom I also love, and tell him that his brother is good. I mean it. 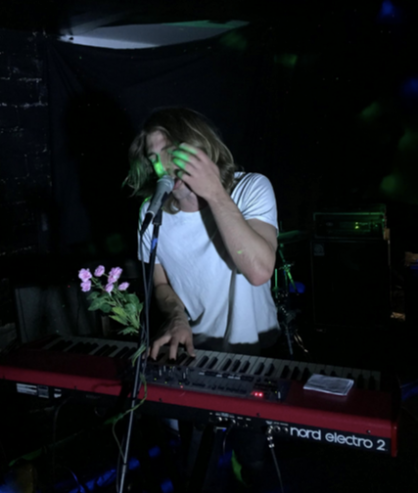 11:57 PM: Samson sings: “reach out and touch me baby, can you feel it?” I dare you to make sense of pop lyricism and the existential harm it causes, and thus why it is pleasurable, that sensation of imaginary flying knives aimed at one’s heart and the pleasure we learn from platitudinous metaphor, which people grow out of once they cease to be teens, unless of course they do not. You know what I have typed but you do not know what I have heard.

12:11 AM (SUNDAY): Hail cab on Graham Avenue that will take me the distance to Greenpoint, I have had quite enough. I have lost no love for Samson. I did not say goodbye. It’s an early night, blessed relief. I will watch TV in bed next to my boyfriend, say goodnight and fall asleep. I will see him when I wake up, and then I will text somebody.

I’m a 25-year-old scum magnate, editor, author of a book called Action (it comes out from Grand Central mad soon), and writer for Rolling Stone, NME, The Guardian, et plus, but I'm also too sentimental to update this fossil-biography: My name is Amy Rose and I’m a 20-year-old writer and student living in Brooklyn. My writing has appeared in Death & Taxes Magazine, Converse’s Play:Talk blog, Impose Magazine, and Mishka’s Bloglin (under a gross pseudonym), among other publications. My interests include The Replacements, Super Mario, Rodarte, Roland Barthes, and identifying the world’s best cheeseburger. You can reach me on Twitter @amyrosary or email me directly at rushandpush@gmail.com.

View all posts by Amy Rose →